WELCOME TO THE PRAIRIE OASIS!

A century ago, the Faith area was grasslands inhabited by plains Indians and a scattering of French fur traders. It wasnt until the early 1900s that the settlers began to come to this area in great numbers.

The Milwaukee Railroad starting building westward and many small towns sprang up along the proposed line. Each town hoped they might be the final destination on the line. Many people across the state were ready to move on a minutes notice to reach the chosen town and establish their businesses as soon as possible.

Finally, in March of 1910, the railroad company announced the end of the line by buying land on the western edge of the Cheyenne River Indian Reservation. The president of the company named the new town Faith after one of his daughters and Isabel after the other. After the first train chugged into Faith in 1911, long trains of immigrants arrived daily and almost every quarter of land was homesteaded, at least temporarily.

Faiths first bid for fame came in those early years as the largest initial shipping point for livestock on the Milwaukee Railroad System. Although the Faith railroad line ended in 1978, it still has one of the largest livestock markets in the country.

Today, Faith, is a small cowboy community of 550 people, is located at the crossroads of Highways 212 and 73 in northwestern South Dakota. Agriculture, in particular, the raising of livestock and dry land farming, is the basic industry of the area. Faith serves as the trade area to these farmers and ranchers.

The area around Faith offers excellent hunting for antelope, mule, and whitetail deer, ducks, grouse, and prairie dogs. There are also many stock dams which offer great fishing opportunities.

Faith is well known for its annual celebration, Faith Stock Show and Rodeo, held the second weekend in August each year. The event is kicked off with the Dakota Championship Daily Team Roping, Calcutta, and continues with four days of livestock shows, parades, wild bronc rides, exhibits, and lots of wild and woolly night life.

Faith is also known for the T. rex named "Sue" that was found on Maurice William's ranch not far from town in 1990. This T. rex gave Faith the name T. rex Capital of the World. Several years later in 1998, Bucky Derflinger discovered two T. rexes, "Bucky" and "E.D. Cope", 15 miles north of Faith on the Wade Derflinger Ranch. In 2013, "Darwin" the T. rex was discovered on the Hauser Ranch north of Faith and is in the top 10 for most complete T. rexes ever discovered.  (We are currently in the process of listing more information about each of these T. rex specimens, so stay tuned!) 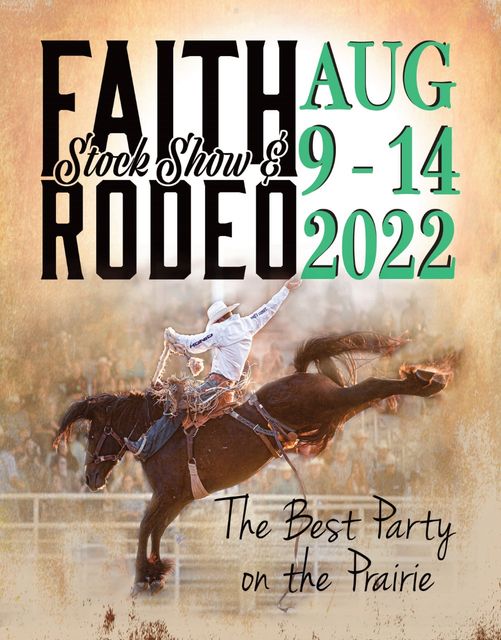 Click here to view the schedule for our 112th annual Faith Stock Show & Rodeo.
There are lots of exciting things planned for all ages, and we hope to see you there!

Thanks for visiting!
Please let us know if you have any comments or suggestions!